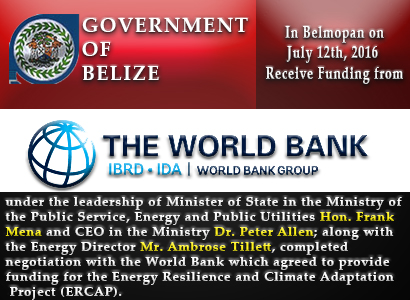 Belmopan. July 12th, 2016. The Government of Belize under the leadership of Minister of State in the Ministry of the Public Service, Energy and Public Utilities Hon. Frank Mena and CEO in the Ministry Dr. Peter Allen; along with the Energy Director Mr. Ambrose Tillett, completed negotiation with the World Bank which agreed to provide funding for the Energy Resilience and Climate Adaptation Project (ERCAP).

An integral component of Belize’s national development agenda is to develop strong sustainable energy policies and programmes that underpin the national economy. It is for this reason that since its formation in 2012, the Energy Unit of the Ministry of Public Service, Energy and Public Utilities has been working towards integrating energy in national development planning and decision making to catalyze sustainable development in Belize.

In 2014, the World Bank and the officials from the Ministry of Energy initiated discussions on a programme of support for the purpose of making the energy systems in Belize more resilient and adoptive to climate change. In order to implement the project the Government of Belize has been collaborating with the Belize Electricity Limited and the National Meteorological Service in the planning and preparation of the ERCAP.

All eyes are on Belize as the leading country in building Energy Resilience for Climate Adaptation in Central America and the Caribbean.